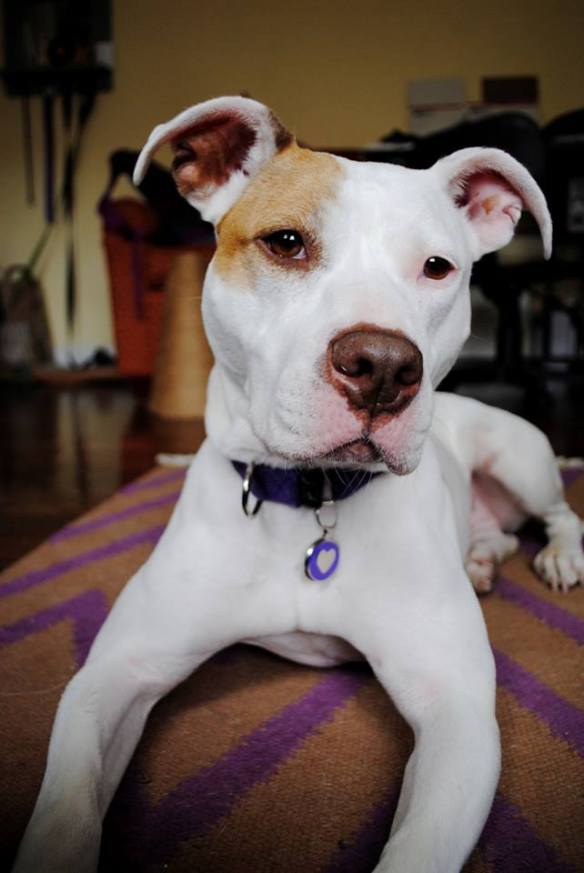 After fighting my landlords to allow me to have Itty I made the decision to move out of my current apartment to a place that will hopefully be safer for us. My landlords gave me permission to keep her right after I brought her home but I’ve been dealing with my downstairs neighbor threatening us since November. He has continued to show how scared he is of her by acting irrationally and has threatened to kill her twice since November.

While I fully expected that people would be nervous around her, since pit mixes are constructed as inherently dangerous or aggressive dogs, what I didn’t expect was him trying to get her to react every time we were around. Not only forcing us to completely avoid any place he is in the building but adding to my own anxiety while living in this building.

Getting Itty was the best thing I’ve ever done for my own wellbeing, outside of deciding last year to live on my own instead of finding a new roommate. Having her around has allowed me to work through my anxiety and be more functional on a daily basis. She’s come so far since I got her and we are almost ready for her to pass her Canine Good Citizen exam. She’s turned out to not only be a great dog but so helpful to me personally.

As she’s progressed through her training, I thought that the passive aggressive behavior would stop if I gave it time and for a bit it did but at the end of January he yet again started acting out towards us and it made me decide to start looking for a new place to live. I thought it would be really hard to find a new place to live but instead I found a great apartment that is a little bit bigger not to far from where I’m living now. I picked up the keys last Friday and will be moving all of my larger things next week. 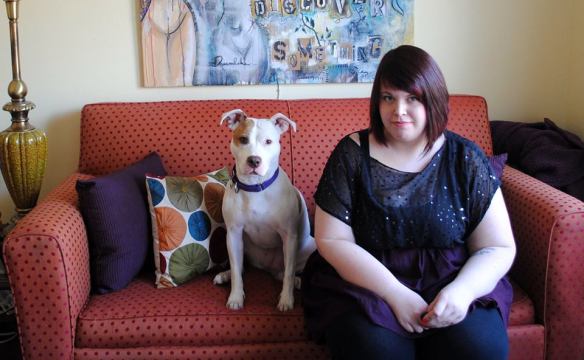 Not only did this landlord help me make sure the apartment was mine, he even said in the spring they may put up a fence so Itty has a place to live. It will take a bit to get everything back to normal once I move but I’ll be happy to be in a building where Itty and I don’t have to deal with violent behavior or worry about living in unsafe conditions.

I didn’t want to move and I’m doing it on almost nothing, as I am living on very little right now as a grad student, but I think this move will be the last one for a long while. At least until I know what I’m doing after I finish my masters.

My life has been a huge transition over the last year. I started and finished my first year of graduate school. I presented research at two different national conferences. I’m now working a steady job for the first time in what seems like forever. Overall, things seem to be going great but I’ve felt like something was missing. In March I started living without a roommate for the first time and it has given me a space to call my own. At the same time the anxiety I’ve dealt with since I was in my teens has become a more apparent and something I’m trying to tackle instead of just ignoring it or simply accepting it for what it is.

Social anxiety has been something that I’ve dealt with since my early teens. It came out in what would probably make people believe I was just shy or introverted when I was younger and even now, which wouldn’t accurately describe what I deal with daily. The truth is I enjoy being around people but my ability to cope with the anxiety that comes along from dealing with other people and every day interactions has been limited. Since 2010 it has meant I’ve had to be very conscious in what I do, how I spend my time and how I simply take care of myself.

I often like to joke that I retired from the service industry in 2011 but the reality was my body couldn’t take the stress, anxiety and long hours that comes along with those jobs. I wrote about having shingles during that summer but I didn’t connect it to my normal anxiety. Now I know that this wasn’t just one instance where I was sick but related to how my body copes with overwhelming levels of anxiety.

After that summer I was able to rearrange my life a bit by having a work schedule and job that gave me the ability to focus more on caring for myself during my free time. Being able to have more time for myself improved how I was able to handle my anxiety and meant I wasn’t getting physically ill on a regular basis. It wasn’t until I started applying for graduate schools that the anxiety that I had kept under control for a few years cropped up again.

Once I started graduate school last year I spent a lot of time wrapped up in anxiety not just due to the work involved for school but juggling work, activism and the increased levels of trolling I was paying attention to as I was collecting data for my thesis. While I was still able to take care of myself, it often meant only making sure I was sleeping enough and eating regularly.

I’m at the point now where I’m still trying to figure this stuff out. My anxiety feels more at the surface than ever before. Something changed since I moved out on my own. Many things have been positive and having space for myself where I’m able to completely define who I am has been fulfilling but I’ve decided I need to stop just dealing with my mental state and instead be really truthful with what I need.

I’ve realized I need structure. The fatigue I feel after being overwhelmed with anxiety doesn’t just have the possibility of making me unable to function but often leads to not eating regularly. It also means I’m simply not interacting with other people or leaving my place for days. This summer I dealt with everything by sewing clothing and while it allowed me to work through the emotions I was feeling right then it didn’t help with me getting out of my head or being more functional.

I’ve been working as a caregiver for a girl whose family is looking for a service dog for her and when I was researching about service animals, as they haven’t had luck finding an organization who wants to help them and are now looking into hiring a trainer themselves, I started to find information that related to my own issues. I soon began to realize that while I love my cats I need something different than what they can give me as pets.

After having a really casual conversation about having a dog with someone during the summer I started to seriously think about it in August. I spoke with a friend to find a trainer who could help with basic obedience training if and when I found a dog. Everything changed when I was looking at rescues to see what dogs were available and I saw a dog named Itty Bitty. 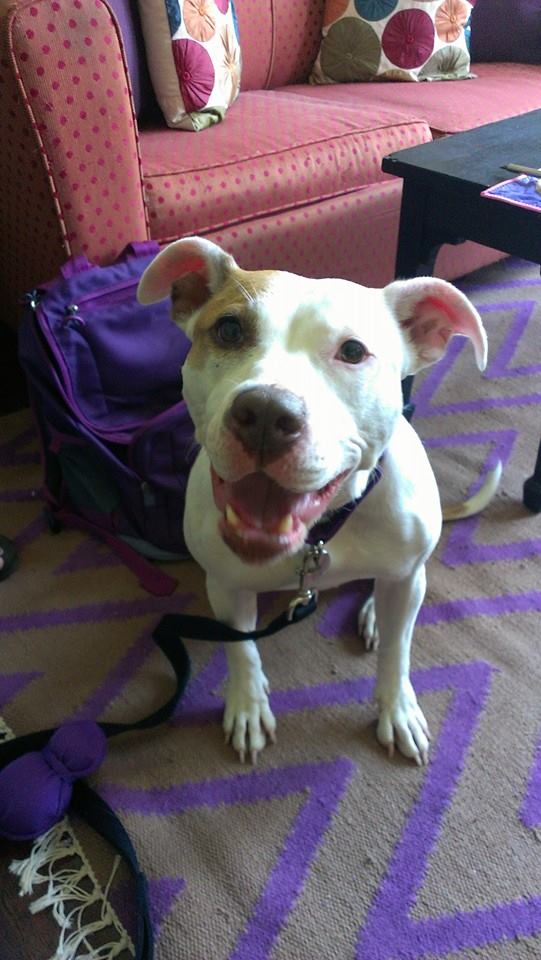 Itty came to visit while I was being approved to adopt her.

I wasn’t looking for a specific breed just a dog that wasn’t a puppy and a dog that was about 50 lb. I ended up going to an adoption event the next day and arriving 15 minutes before they were about to leave. I kind of fell in love in those 15 minutes. This was all at the beginning of September because what I didn’t realize was that my casual approach to getting a dog would soon have to be far more formal than I thought I needed to be.

When I moved into my building in March they were dog friendly. After filling out an adoption application for Itty I called my landlord to ask for permission to get a dog. They informed me that they had recently instituted a “no dogs policy” even though there are dogs in my building and my downstairs neighbor got a dog a few weeks before I called them. The next day I gave them a letter explaining why I wanted the dog and that I would provide the doctor’s documentation needed to bring an emotional support animal (ESA) into my care as a disabled person. ESAs are covered as a reasonable accommodation under the Fair Housing Act (FHA) so I thought it would be a simple process as all I needed was written permission from them to get the dog.

Since then it has turned into a month later, three letters to my landlords (one with the proper documentation from my doctor) and their only response has been to demand things that are not allowed. A few weeks ago they asked for me to sign a two year lease, pay $50 more a month in rent and a $150 pet fee. While it sounds like a reasonable request from them for a pet, ESAs are not considered pets. Itty wouldn’t just be a pet but would be helping with me being more functional and because of that the FHA clearly outlines giving conditional approval isn’t allowed.

Once I let my landlords know what they were asking me wasn’t acceptable and the documents I gave them about the FHA was clear about it they stopped speaking to me. At first I sought legal aid and let the rescue know what was happening. Itty’s foster mom agreed to keep her until it was worked out. As of me writing this my landlords have still not responded to my numerous requests so last week I filed a complaint with the Michigan Department of Civil Rights (MDCR) as they and the Department of Housing and Urban Development (HUD) investigate claims of discrimination related to the FHA.

As I have fulfilled my legal burden to give my landlord’s notice and documentation that I need a reasonable accommodation all I can do now is move forward. MDCR contacted me yesterday and I’m going in to formally sign a complaint against my landlords today. They will be giving my landlords notice at some point this week.

The best news though is Itty is coming home on Thursday. I’m ready to start focusing on living with her.

I’ve made a tumblr for Itty, because duh she needs one.